Wendy Vardaman’s restless Reliquary of Debt, like the pumpkins that flourish in its pages, poses a key question: Where is home? Like the squashes that travelled with Columbus back to Europe from the Americas, the poet and her family show up in divergent settings throughout the volume. For the poet, these places include England, Madison, and Italy, “reversed, inverted, converse,” fitting in and sticking out. Not only in “Tortelli di Zucca Mantovani” but also in the skype poems, the wikiprosepoem, and the more traditional pieces, Vardaman counterposes images of deracination and divergence with community and congruence. Problems – in a world full of the sublime and the quotidian – of being.

The poet expects us to be learned. We read in Latin snippets of Martial’s Epigram XXXI (Book XI) not just a flurry of antiquity but a slap in the face of the North American squash-birthers. Just what was our man in the Roman province of Hispania calling cucurbiti back in the first century CE? A translator (1936) of the Apicius, a 5th century CE gastronomical classic, suggests that the 5th century cucurbits there (being separated from the chapter on cukes) are not cucurbits at all but a taro-like tuber.

So when Vardaman cites the phrase “the Atreus of pumpkins,” she is adding to the dispute over cucurbitude the story of Atreus, a man who chopped up his nephews and fed them to their father. Leveraging Martial’s satire, Vardaman feeds us chopped pumpkin like a mother introducing a recalcitrant child to a new (world) vegetable. We follow the progression of the pumpkin from Columbus to the Spanish Queen’s niece to the Villa Farnesina. We see the “new roots…recipes passed mother to daughter.” We see “a project that visualizes Isabella [d’Este]’s 16th c. social network.” We see the “wheel-chair / bound man” who “calls and waves” at the jogging mother and daughter, “Ciao mamma, Ciao figlia.”

When, however, the wheel-chair bound man’s keeper looks askance at mother and daughter running on the streets of Sesto Fiorentino – wider-seeming, now that the family has seen Roman streets – we also see the smudge of the outsider: There is the shuffler, who yelled/at us as we ran past to walk.  (from Sesto. Running Route)

Like the Ikea in the fog of Sesto, “this slice of Sweden, bright blue and yellow / like September sky,” some things just stick out.

The proper nouns in this volume carry a lot of weight. But what else can one do with Italy? Italy is history itself, art itself, poetry. The country can be like one of its own museums – every available inch covered with a painted canvas or foregrounding a marble statue or stretching itself into an arch because it does not want you to leave it you until you have seen all the details, which can be exhausting:It all starts after too little/time to look alike, duomo to duomo, one frescoed/masterpiece and the next covering a chapel’s walls (from “Siena. St. Catherine’s Head”)

Afterwards, in limited space, the proper nouns are a convenient shorthand: Padua, Villa Borghese, Boca de la Verità, Lorenzo the Magnificent, Cimabue, Giotto.  But a reader can experience a sense of failure when confronted with nouns he does not command. The poet’s children are sometimes afflicted in this way: They/were too polite to say what they believed./that they’d seen enough. (from “Postscript: Post-colonial pilgrims”)

Vardaman captures the roadside attraction that modern Rome has made of the anguished, dying, unloved, medical tourist, John Keats, all 5’1” of him: roses for the lovely/

lady, cashmere. If you shove your way to the correct/

spot between water and stairs…/in order/to squeeze into the hall leading to the blank desk,/the single bed, where Keats arrived, just twenty-five,/ intending to recover, not to die

In Greenwich, in some verbal side-eye, Vardaman conveys the sprint from the Maritime Museum to “one of the fifty-some Tudor / residences of Henry VIII.” But in Florence, she moves slowly in memory over: The scientist I did not spend/my life with sits—two days after Iceland goes/bankrupt—across from me, first time in twenty-five years,/ in the lobby of the hotel he’s staying/on the way to Pompeii with daughters who are not mine./The children who are not his/sit next to me, shifting uncomfortably, as he predicts/some coming oil crisis, economic collapse, and how we/can/prepare for worldwide/panic and famine. He’s planted a garden,/and I wonder if he seriously/thinks a few rows of lettuce would stand/between him and apocalypse…/

In Canto LXXIV, Pound says, “I don’t know how humanity stands it / with a painted paradise at the end of it / without a painted paradise at the end of it.” Vardaman’s response to “it,” however, may be the form she has invented in this volume in collaboration with her daughter, Greer DuBois, the “giotto.” She explains, “These units fit together architecturally, one beginning with the same two syllables that end its predecessor. Although these giottos are built in the round (an ‘O’), any number of alternative spaces could be created this way.” So: 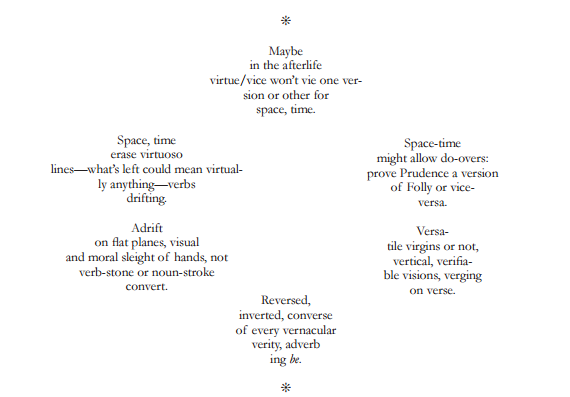 And there it is: existentialism (without the nausea).