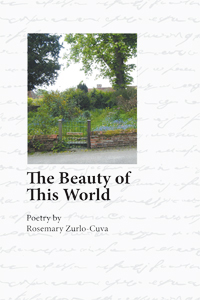 The Beauty of This World by Rosemary Zurlo-Cuva. Parallel Press, 2014

Rosemary Zurlo-Cuva’s recent chapbook, The Beauty of This World, is a brief but pleasant collection of poems.  Zurlo-Cuva starts the book with a prefatory excerpt from a poem by Mary Oliver, reminding us that the natural world serves to ease and heal our human griefs, and she sticks pretty much with this theme throughout the nineteen poems that follow.  Grief, though, is not emphasized: there are several poems about the death of the poet’s mother, a mention of cancer, other less specific sorrows. But for the most part, the poems focus on our encounters with the natural world and don’t go beyond that.

The book’s structure is partly geographic and partly temporal. Zurlo-Cuva starts in Wisconsin, on the shore of Lake Michigan, with the lake “moody in its spectrum of grays” (“December, Big Bay Park, p. 11). The poems then take us to Door County and to the Arboretum in Madison. From Wisconsin, we travel to Great Britain, visiting Gloucestershire and Dorset as well as the Irish coast. We end up back home, at a local dog park and “driving the Interstate towards Tomah” (“Rust and Steel,” p. 28), and finally, in the concluding poem, we are back along the shore of the “gray lake” (“Row Out,” p. 29). Traveling in time, we go from Zurlo-Cuva’s girlhood infatuation with the Beatles—“I could never make up my mind who/I loved most” (“How the Beatles Brought Me the World,” p. 15), through childhood memories of “my father’s/white shirt starched and cool/on my cheek, my/grandfather’s Red Wing/boots, scuffed/with wear and always/in the periphery/of my vision” (“Recourse,” p. 20), and into adulthood with the birth of a child, the death of the mother, and the struggle to create poetry, and finally to the cusp of old age. In the last poems, Zurlo-Cuva writes, “So here we are in our sixties” (“Rust and Steel,” p. 28), and ultimately “I see the old woman I will/become” (“Row Out,” p. 29).

Embedded in these places and times are Zurlo-Cuva’s experiences of the natural world. There’s nothing particularly compelling in her descriptions, though I liked “the rusty-nail bite/of snow in the air” (“December, Big Bay Park,” p. 11). “Rust” is one of the poet’s favored words in this collection; the poems lean toward winter, rain, or “a scrappy/wind” (“Haymarket Pub,” p. 18) rather than the beauties of wildflowers and sunsets. Nor are the poems particularly lyrical, sometimes verging into prose, with uncertain line divisions. At times the voice could be clearer—who is the “you” addressed in “December, Big Bay Park”—“This is what I want you to see” (p. 11)– and who are the “we” that form the “odd couple” in that poem, or who “needed to stretch/our legs” in “Haymarket Pub”?  Still, the poems are inclusive, reaching outward to share small, thoughtful experiences with the reader—a nicely crafted and reflective book that I’m sure you will want to come back to, many times, with quiet enjoyment.