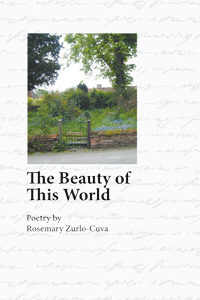 The Beauty of This World by Rosemary Zurlo-Cuva. Parallel Press, 2014.

Rosemary Zurlo-Cuva’s chapbook of nineteen poems receives its title, The Beauty of This World, from a Mary Oliver epigraph, one sentence of which reads, “A lifetime isn’t long enough for the beauty of this world / and the responsibilities of your life.”

A spiritual sense of dedication toward the world is certainly Mary Oliver’s project as a poet, but Rosemary Zurlo-Cuva’s project seems more aptly expressed in her poem “Recourse.” It begins, “I often recall that time / lived in the lilt / of my mother’s voice,” and it ends with the lines,

… these same details
I’ve tried to write over
and over, as if to render
us whole and together
once more.

My title for Zurlo-Cuva’s collection would be “Render Us Whole and Together,” expressing how many of the poems in her chapbook overtly beseech memory and the writer’s art to complete some image of the world.

Two poems back from “Recourse,” the poem “Haymarket Pub” shares the same last line, “once more.” The poem begins with a tour group’s experience of London in the lines, “… we needed to stretch / our legs, to feel sun for the first / time in days…” It then moves to the narrator’s singular experience with photographs, recalling “… I look / at those now and remember the unremarkable / pub where we sat to rest our feet and drink / for a while….” The narrator then renders the past in a self-conscious, speculative voice from the present, suggesting “how we must / have seemed loopy and loud….” The shifting narrative viewpoint is reinforced by memories of “scrappy / wind” and “hair flailing” and the “Thames high and churning,” all of which enacts the very instability of a poet’s work to convey memories.

The poem after “Recourse” is titled “In This Way We Conjure Our Lives,” and its conjuring shares with the former poem the word “render” in the lines, “render the world / speechless.” The poem begins, “I do not strain to bring back the words / my father said to me, but the sound / of his living voice. …” This is a poem about the difficulty of making memories live again, the poet nearly lamenting in the lines “…. And yet I spend most days struggling / to find the right word, as if words might mean / everything, when perhaps they mean / nothing….” Again, the reader finds openly-acknowledged struggle in the narrator’s attempt to render a stable whole.

Zurlo-Cuva’s poems move through physical locations in England, Ireland and Wisconsin that reveal her engagement with the natural world, but the expressive depths of these poems derive less from their physical description alone than from the poet’s self-conscious desire to convey it through the distance of memory. The first strophe of “December, Big Bay Park” wonderfully illustrates the effort to capture it all as possible visions – and possible seasons – compete:

This is what I want you to see: Lake Michigan
moody in its spectrum of grays, the rusty-nail bite
of snow in the air. In summer the sand will whiten, the water
turn magically blue-green, but this is the lake I will show you:

The beautiful world is too big for the poet to contain, but its beauty is less the responsibility of the poet than her account of trying to contain it, and to present it to readers. It’s an intriguing project, and it succeeds on many levels of failure to render it whole – a fascinating and humbling journey that we can be grateful Rosemary Zurlo-Cuva shares with us.

John Olski is an associate librarian with teaching experience in college writing.  He is a member of the Wisconsin Fellowship of Poets and has presented his own poems at WFOP readings.  John’s poetry reviews have also appeared in Verse Wisconsin.