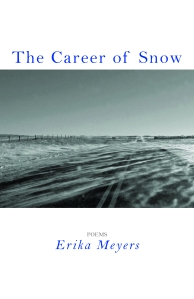 While title poems can be located anywhere in a collection, offering a kind of scavenger hunt for the curious, Erika Meyers presents “The Career of Snow” up front, giving it epigrammatic weight for her chapbook:

The career of snow falls
for what the sky forbids.
It waits to be shaped
into men by kids.

This nod to the colder world follows a chapbook cover image of snow swirling over a receding prairie highway. It also prepares us for a book with some intellectual play in its use of language, as double meanings provide snow with a “career” and gullibility in what it “falls / for”… and the developmental truism that “kids” – “shaped” – “men” fights with a stricture rhyming “forbids” with “kids.”

Erika Meyers explores human conditions of health, home and work through points of tension in which we’d all like to be empowered as individuals, but social circumstances turn our lives in random ways, like elements of the weather.

“Selling Doors in Cleveland” presents a narrative persona in a prose-poem theatre of the absurd, selling doors door-to-door in a neighborhood too poor to buy, until the whole point shifts from futile sales to the real condition of people’s impoverished hopes.

“Strings” depicts the mansions of “Millionaire’s row” as both pearls and rosary beads, with time and the soot of industry intervening between the metaphors.

“In Praise of Discount Brand Weather” first describes Ireland’s climate as a cheap “knockoff” of Cleveland’s, including “The inch of snow that cancels work / for three days.” Yet the narrator’s facile comparison turns on a heavier social reality, in preference of Ireland’s “rain / that lashes drug addicts back / into their homes / so tonight the pit pat / on my rooftop / won’t be the footsteps of thieves…”

The poem “Two Winds of the Same Breath” may be more ostensibly about weather, but its imagery builds a memorable dichotomy between individuals and collective forces:

… I’m recorded on
every security camera while

the wind passes by
unseen. I pick up limbs

by feet of snow in March
….

At her best moments, Erika Meyers extends the double meanings of metaphors to create poetry from what could otherwise read like a proletariat manifesto. The downside of her chapbook is that there are too few poems – only twelve, all starting on right-hand pages (recto), four of which are only quatrains like the first poem, and not equally as replete with meaning. There is a minimalist appeal to the look of one titled quatrain in the white space of two open pages, but some readers will prefer more from a book so beautifully constructed with the author’s name on a flat, stapled spine. Fortunately, The Career of Snow is only Erika Meyers’ second published book, and her first collection of poetry. The author is poised for her own successful career as she develops a body of work from this promising beginning.

John Olski is an associate librarian with teaching experience in college writing.  He is a member of the Wisconsin Fellowship of Poets and has presented his own poems at WFOP readings.  John’s poetry reviews have also appeared in Verse Wisconsin.